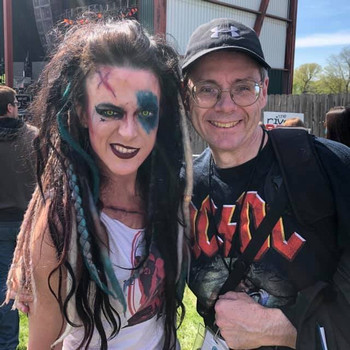 Making others see the whole picture through my eyes is the number one goal of mine; the photographs I take shows that thinking out of the box, looking at things from a new angle and pursuing for a fresh perspective is not something that I just do but a passion of mine for your viewing pleasure.

I was born in Auburn, Nebraska and had lived there for first 6 years of my life then my family moved to Lincoln and Omaha during my youth. After I got out of college, I got a job with an electric utility company in Columbus, Nebraska in 1988 and have called Columbus my home ever since.

I specialize in concert and live-event photography. My photographs caught the eye of an editor of an online magazine company that focuses in various kinds of music concerts and they hired me. As an avid concertgoer, this fits my interest perfectly.

My first exposure to concerts was in 1979 when I attended ‘Dynasty’ tour by KISS. My Mom loaned me her old point-and-shoot Kodak with 126 film and I was lucky I didn’t get caught by the security for bringing my camera inside. Few pictures turned out OK but the rest was blurry since it was general admissions and I had to stand at the main floor among other fans. The blurriness was a result of fans shoving others and me around during the show!

Later on, I went to see Van Halen with my new Kodak camera with 110 film and most of the pictures turned out nicely. Eventually, I went few more shows without any incident until AC/DC came in town on ‘Flick of the Switch’ tour, the security people took my camera away and returned it to me after the show. That’s when I stopped bringing my camera until KISS’ ‘Reunion tour’. I decided to give it another try without any incident.

I decided to purchase the nice compact camera with 35mm film and zoom lens and used it for a while until I got myself good digital compact camera with 10x zoom. Most of the photographs I took turned out great. My latest show I attended was ‘Night of the Living Dreads’ tour co-headlined by Rob Zombie and Korn. I was very pleased with the shots I took because many of the photos turned out real fantastic. That was when I connected with the editor who runs an online magazine company. According to him, he was very impressed with my photography and thought I have a great eye.

As a fan, the wide variety of bands I have shot excellent pictures was AC/DC (Black Ice tour), Blondie, Joan Jett and the Blackheart, KISS, Rob Zombie and early Van Halen. I plan to add some more bands to my portfolio within few months, including ZZ Top, Motley Crue and a local tribute band. I hope I will do 5-10 live concerts this year and add a lot more afterwards.

As you can see that doing the concert photograph is my PASSION. Anyone can just point the camera and shoot a picture but the uniqueness of my ability to bring life to the photographs is unequalled, the pursuit to capture the heart and soul of music concerts in photographs, and the satisfaction of my clients in my work is the lifestyle I enjoy.

I am also available for any special photographic projects.